We have been highly evaluated our dissemination activities. We attribute our award to a lot of customers who have repeatedly debated over how Japan’s Mondzukuri should be as its duty, all the people concerned who have supported our company’s activities, and all of our employees who are being part of one team up to now. All is the result of your continuous support our company regard it as a gift.

The reason for this award is to highly appraise the value of technology development and product development and its dissemination activities led­by our company in the area of Monodzukuri until now. This means that again we attribute this to many customers, people who have supported our company’s activities, and all of our employees. For LEXER RESEARCH Inc., it is such an honor to have you all and would like to show our deep appreciation to you.

This is also the result of collaboration and support of you such as users and supporting organizations. For this time of award, we would like to express our gratitude to all of you. 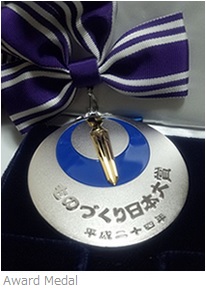 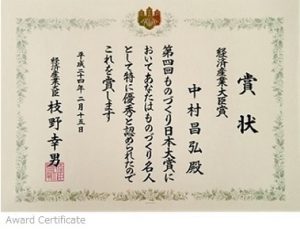 The “Monodzukuri Nippon Grand Award” is an award system introduced by the Japanese government in 2005 and it is implemented in every other year.

The purpose of the Monodzukuri Nippon Grand Award can be described as below:

It aims to steadily succeed “Monodzukuri” which has greatly contributed to the development of industries and cultures in Japan and also largely contributed to the improvement of people’s quality of life. For further advancement in the Monodzukuri field, this award is given by mid­level professionals who are in charge of the key at the manufacturing and production site, skilled human resources who has supported for traditional and cultural “skills”, and young people who will take responsibility for the future, and excellent personnel who are recognized among each generation concerned with “Monoduzkuri”. As such, the award credits to those accomplishments which are deemed particularly outstanding, and have a contribution to the Japan’s Monodzukuri. 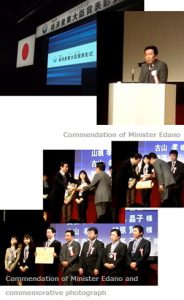 The award ceremony and celebration were held at the National Graduate Institute for Policy Studies in Roppongi, Tokyo. After receiving a congratulatory message from the Minister of Economy, Trade and Industry, Yukio Edano, we were given a commendation letter from Minister Edano on the podium and take a commemorative photo together.

After the award ceremony, a celebration was held grandly as with the prize winner, Minister Edano, the senior officials of the Ministry of Economy, Trade and Industry, the judges of the award, and many stakeholders participated and we received many congratulations from you. 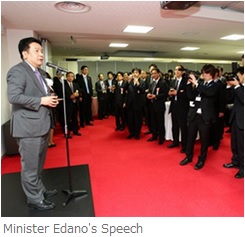 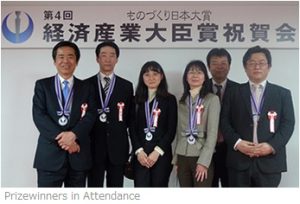 We are accepting this award as a fruit of result with all of you who has done this together, not solely as our company’s award. Taking this opportunity, I would like to say thank all the people concerned once again and also appreciate for letting me notify this to you. I’m really grateful to you.

With the award in this time, we are planning to continuously promote further contribution activities for the monodzukuri industry. It is our hope for support of our customers, stakeholders, and others with regard to the fact that LEXER RESEARCH Inc. is going to challenge the current paradigms of monodzukuri. We look forward to your continued support.

* We would like to thank you for all the support up to now and we have prepared a pen for commemorative gift. This pen is a work piece produced by “Kirita Pen Workshop” (ペン工房キリタ) which is planning and making original pen at the factory in Tokyo. In commemoration of this award, we thought that the pen of this workshop, which has been devoting for maonodzukuri with passion, was suitable for our commemoration.

Therefore, we have asked for customized production with a professional processing machine and the pen has been made one by one carefully. We would appreciate if we can receive your favor regarding this gift.

Japan’s oldest surviving chronicle, the “Kojiki”, contains a collection of stories concerning the creation of the islands comprising Japan. Within these stories, a large scratch in the land created by the weapon “Amenonuhoko” symbolizes the beginning of Japan’s manufacturing industry. Manufacturing, akin to development of a nation, is the spirit of the tradesman and handed down from generation to generation. The crescent­moon­shaped engraving created by “Amenonuhoku”, the tradesmen, gave rise to a people with a high quality of life. The blue color of this mark in the Monodzukuri Nippon Grand Award symbolizes products of the utmost quality and skill, and it is representative of the spirit underlying Japanese culture and traditions. 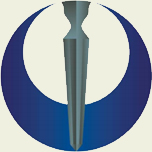 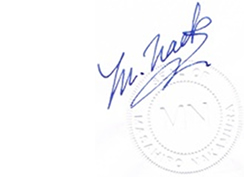 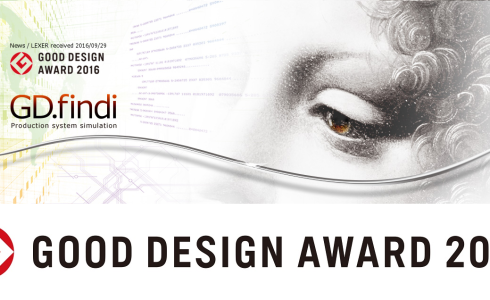